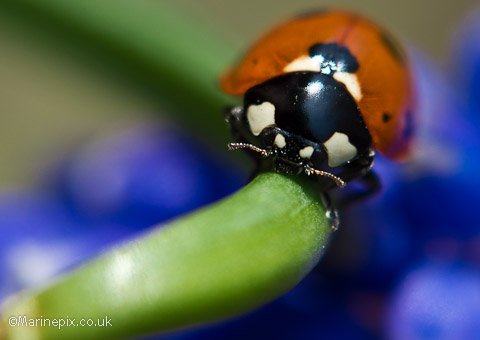 Taking macro photos, especially of insects, is something I love to do. It’s amazing how much detail you can see in a nice sharp photo.
One thing I’ve not seen too many photos of is ladybirds… I spotted one in the garden whilst setting up the camera for a lovely shot of a bee sipping nectar from a flower. ( Since the bee didnt cooperate, I dont have that shot to show you!)
The bug was resting on the stem of a blue hyacinth flower and I thought the green and blue against the red of the insect would look really nice. Something I confirmed with a couple of hand-held test shots.
I didnt have my tripod with me so I was relying on a reasonably fast shutter speed (1/200th) and I braced myself against a block of wood to ensure focus was as accurate as possible when the shutter release was pressed.
At this point, I was using my 60mm macro lens together with an extension tube which effectively increased my focal length. I knew the depth of field would be minimal so I upped the f-stop from the minimum, keeping my ISO at 100 for as much clarity as possible. I played around with settings and I think, with a tripod I may have been able to get better shots but on the other hand, this little bug didnt “rest” for too long and I’ll tell you it’s rather difficult to take extreme closeup shots of moving insects!