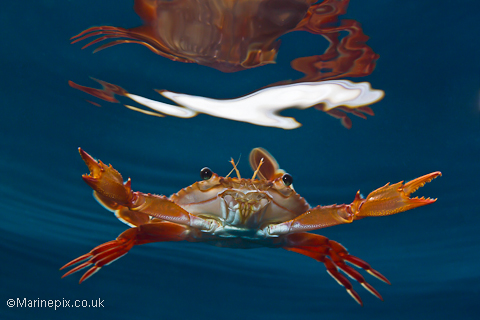 Not actually taken on the 16th of May, this crab is one of several (hundred) thousand that live in the waters of the Red-Sea off Djibouti. I was there back in January on an expedition to photograph Whalesharks but these nippy little guys were such a “feature” of the trip that I had to take a few images of them too.
Last week I submitted this image to the monthly BSoUP (British Society of Underwater Photographers) competition – this month entitled “crustaceans”. Since the judging is occurring in London as I type, I dont feel I’m affecting the votes in any way by writing this now!
Not being a Marine Biologist and not wishing to give out dodgy information, I’ll just say that this is a “red swimming crab” (Perhaps one of my Marine Biologist friends can help out with a decent species name?).
We have velvet swimming crabs in the UK, although I’ve never seen one actually swim, but these guys in Djibouti were surrounding us as we snorkelled way above the bottom of the sea. It’s possible they were feeding on the same plankton which the whalesharks were after. It was clear that the whalesharks were fussy eaters since any crabs that were inadvertantly vacuumed into a shark’s huge gaping mouth were soon “spat out” again. Actually, it could well have been because the crabs were using their needle-sharp pincers as weapons… A whaleshark’s skin in pretty thick and tough but the little crabs could inflict serious pain!
In fact, I’ve not encountered another creature in the ocean which so enthusiastically wanted a piece of me… I’ve no idea if the crabs were defensive, aggressive, curious or hungry; all I know is that it hurt!! Still, they made an amusing talking point and I’m rather pleased with the resulting images I obtained. I hope this one will do well but since the competition is entered by many seasoned professionals, I shall not worry too much if it doesn’t generate too much interest. I hope you like it!
Update: My image came SECOND in the competition!! How completely excellent!
You Can Click Here To See The Top 6 Entries On The BSoUP Website! 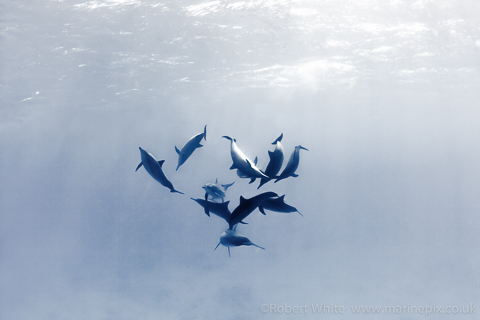