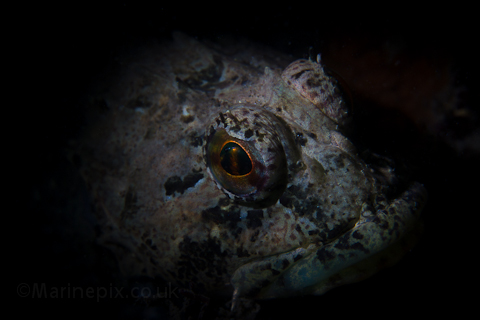 A break in the poor weather and an invitation from my friend Nick to join him for a dive in Selsey was too good to miss.
The visibility in the chilly, early-morning water was around 1-2 metres so quite adequate for macro photography, especially with the snoot I was intending to use… This DIY job was in fact a 60 pence funnel with the end cut off and part of an old wetsuit sleeve to hold it to my strobe.
There was a LOT of surge (back and forth movement of the water) so I found the main issue was staying still enough to line up a shot with the subject in focus, the snooted light pointed perfectly and then get a decent composition into the bargain! I took so many shots which were slightly out of focus or which had part of the animal slightly out of frame. When you put such effort into shots, I think it’s natural to regard them as your “best” images but in my experience, it makes no difference to those who are casually looking. People like colour, contrast and things which either show character or mood or imply a little “story” behind them. I think this is something I need to practice.
The image here is of a scorpionfish – it was about 8 inches long and wasnt spooked by me repeatedly looming then retreating in the frustrating surge. I’ve used the snoot lighting to enhance the mood a bit, as well as to isolate the subject from its background and reduce backscatter.

The conditions meant I had to put a lot of effort in but what makes this image is (I think) that by shear fluke, reflected in the eye of the fish is my dive-buddy Nick with the beam of light from his torch pointing ahead of him. Very tricky to see here so if you click on the image, you’ll see the larger image.