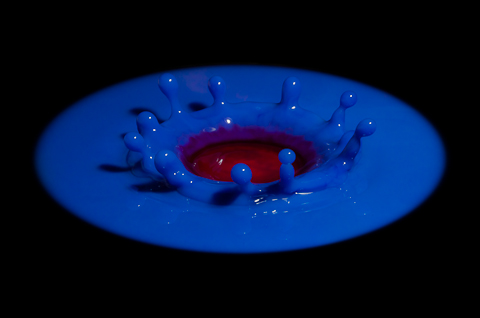 It’s something that I’ve had a go at in the past (with limited success) and I’ve wanted to try again with some more control so I obtained a “drip kit” from a local government contact I have, I constructed myself a wooden frame and I had an electronics timer built by a brilliant engineer I know.
I started dripping water into bowls of water to get a “spike” of water rising from the bowl. To freeze the action, there were two options. Have the camera triggered by the timer unit and use a very high shutter speed or, have a seperate flash fired by the timer. I chose the latter since it had been recommended, plus, I knew that the flash duration was far quicker than any shutter speed my camera could come up with.
Following some success with the spike photos, I inverted the bowl to try creating “crowns” which are the result of much shallower water. Really, I was playing around with the timer, making sure I could get the shapes I was after. It was clear that I could but I needed to get some better lighting since my images lacked colour.
After some experimentation, I found that the water tended to take on the colour of whatever was surrounding it so I started propping up bits of coloured paper, etc. This too proved somewhat successful although it was clear I needed more practice. Finally, that evening, I started playing around with milk and food colouring. I guess milk itself would’ve been fine.
The image you can see here is the result of blue and red food colouring in milk, on a shallow saucer, with a “snooted” flash (where the spread of the light from the flash is limited by bits of cardboard). I’ve cheated a little in that I’ve enhanced the dark edges to the point where nothing else is visible but I’m hoping, when I get another chance to use my drip-kit, I’ll be able to improve my lighting.
More Splash Images From This And My Previous Attempt (Without The Timer Kit) Can Be Seen Here.