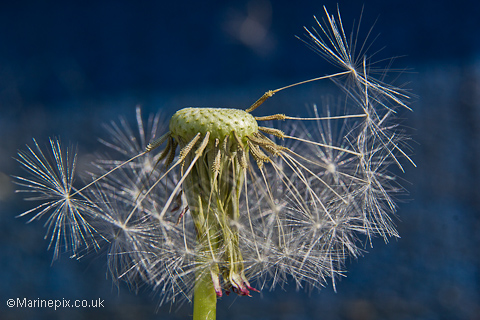 I had to wait a while before I finally found a dandelion in the garden in a state it could be photographed.
That’s not to say the garden is altogether free of weeds but it was a dandelion I was specifically looking for. It was a sunny day so the light was harsh but it also meant I could vary the settings on the camera without worrying about the image being too dark.
I set up the tripod and camera and proceded to work my subject. Using a 60mm macro lens with (and also without) a teleconverter and a 25mm extension tube meant my depth of field (the area of the photo in focus) was razor thin and as a result, I got really frustrated with the miniscule amount of breeze that was blowing… I had to pause for every tiny movement of the dandelion as it phased out of focus, patiently waiting for it to settle back again before I pressed the shutter button.
I practiced using “mirror lock up” at one point to reduce any remaining vibrations but even then I found it to be rather hit and miss since there was a slight delay between composing the image, locking the mirror up and actually shooting the picture which was enough to allow the plant to be blown out of focus!
So, needless to say, in the end, I had a huge number of photos to browse through and inevitably many of them were very similar. Towards the end of my session in the garden, I blew some of the seeds from the head of the dandelion and captured this shot. It’s different from all the others and I think that’s why I like it.
It’s possible the white smudge above the seed head could be judged as a “distraction” but I left it in because it’s a single seed that got caught on the wall of the shed which I was using as a background.