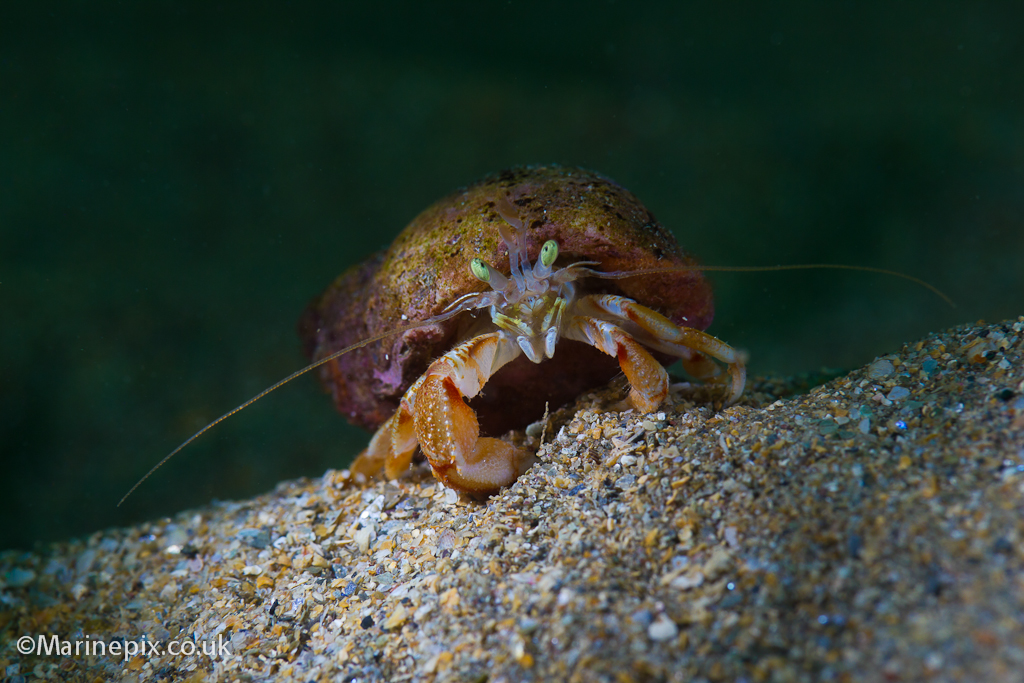 This year’s BSoUP, British Underwater Photography Championship took place in Plymouth at the weekend. Thirty eight people registered as participants with rules stating that submitted images needed to be taken between Friday night and 6pm on Saturday when the judging would start. Seven of us chartered a boat (UK National) to dive off-shore and we headed out to a nearby sheltered site called Pier Cellars with a depth (we found) of no more than about 8 metres.
The seabed was thickly covered with kelp which made it difficult to find subjects… I saw star-fish, small shrimp and skittish, sand coloured-fish but I was hoping for something with a little character which I could distance from the background in some way. When I found the sandy area at the edge of the kelp “forest”, I also found the subject of the photo here. I observed the crab’s behaviour for a while and then settled the camera in a bare patch of sand, close enough to get the crab in frame whilst also allowing a little “breathing space” around it.
I took several shots before I got my lighting right – I was using 2 strobes, one with a snoot, the other just to lighten the shadows. When I got the lighting right I moved the camera with the crab, waited until it was atop one of the gentle ridges in the sand and then fired off another 2 or 3 shots. The image here turned out to be the best of the bunch.
The rules of the competition stated only post-processing adjustments to the whole image could be made. As such, I boosted the contrast and the colours a little before I submitted my image.
I was really thrilled to receive my prizes which included a commissioned piece of artwork from SubAquaticArt and a dive-cylinder cover and canvas print from ScubaCool as well as the BSoUP trophy
To be honest I was a little shell-shocked and was unsure of the correct procedure for accepting an award! I’m still not sure if my eyes were open or closed for the official photos, nor if the trophy was the correct way round but I know I had a smile on my face!
There were 4 categories for submissions. My image won the crustaceans category which was announced on the day.
You can find more details on the BSoUP website.
Thank you to BSoUP for making it all happen and many congratulations to all the other winners!