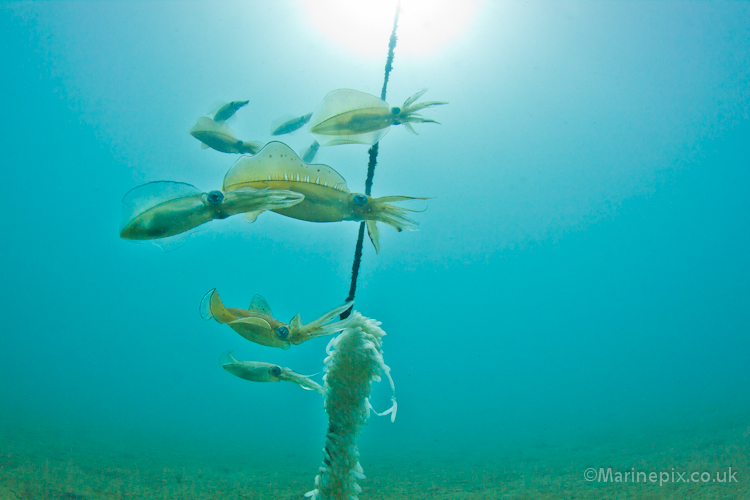 It’s been a while. Christmas does that to me.. distracts me from some of the stuff I enjoy – one of which is documenting my photography – even if no-one ends up reading past the first paragraph each time! 😉
I run the risk of getting boring by publishing another squid picture but I was really blown away by the activity I saw that day in Ambon.. The animals weren’t frightened and they carried on much as they would’ve if we weren’t there. This image shows the squid lining up to lay and fertilize eggs as well as the eggs themselves and the rope/mooring line to which they were being attached. The fact that there are 9 squid in this one shot hopefully indicates the amount of activity we encountered. They were all over the place!
I’m rather pleased with the way the shot-line runs up into the glowing ball of sunlight in this shot… I have to admit it’s happy chance that it happened that way… I was concentrating more on the positions of the squid than the rope involved. Ordinarily, I’d take Martin Edge’s advice and shoot with the sun behind me but since there were a number of divers present and the squid tended to stay on one side of the rope, I had to make do. I’ve tweaked the white balance a bit here so the colour of the squid is more realistic. It changes the water colour a bit but but I dont think it detracts from the picture. What do you think? I always fear putting large-sized images on the internet since I’ve heard of and seen so many images stolen from their rightful owner. As such, I’m limiting the size of images I post and I’m adding a watermark to each but if you click the image here you’ll at least see a slightly bigger version. It’s worth seeing “big”
Camera settings for this shot were 1/125th sec at f/11 using a Tokina 10-17mm fisheye lens (at the 10mm end) on a Canon 550D camera, Nauticam housing and Inon z240 strobes.
If you like the image, do check out the other images on my website, facebook or instagram.